A Journey To The Top Of The World

I have chosen to relate the novel Into Thin Air to the TED Lecture entitled “Medical Miracle on Everest.” This lecture features Ken Kamler, who was actually the only doctor on the slopes at the time of the 1996 Everest disaster. Ken discusses an incident that is only briefly discussed in the novel, and offers more insight on this specific story. This is the story of Beck Weathers, who was one of Jon Krakauer’s teammates on Everest in 1996. On the night that the storm hit, Weathers was severely impaired by the high altitude, low oxygen, and intense weather, causing him to collapse in the snow, where he would remain for 36 hours. Once found by his teammates, some time later, it was declared that Beck Weathers was dead. However, it was the next day that Beck Weathers would descend down 3,000 feet and stumble into Dr. Kamler’s medical tent, set up at 21,000 feet, in a completely coherent state.

Understandably, Ken Kamler was in complete shock. After already being told by several people that Weathers had died in the storm, he was astounded that Weathers was not only able to descend to the tent, but showed no signs of mental impairment like many of the other climbers. After being in the freezing cold snow for 36 hours, in what Dr. Kamler called a “catatonic state”, Beck was alive.

Other than simply being one of the characters mentioned in the novel, Beck’s story can be easily related to the themes and ideas discussed in Into Thin Air. Krakauer’s novel discussed the idea that when faced with a near-impossible situation or environment, like a deadly storm at 25, 000 feet, humans are often able to use motivation to empower incredible actions. Beck Weathers’ story is a prime example of this incredibly and unpredictable human ability.

Once returned from Everest, Kamler was able to analyze and look into what may have caused Weathers’ astonishing recovery. By imagining that Beck was hooked up to a brain scanner at the time of the incident, the successful doctor was able to infer what was happening in Beck’s brain at the time of the event. It was eventually concluded that, by some sort of medical miracle, Beck was able to use motivating images of his family to generate energy that allowed him to “generate thought into action” and get up from the snow, says Dr. Kamler.  Kamler also stated that Ken’s situation “shows you what the power of the mind can do.”

Although Beck’s story was not discussed in great detail in the novel, Krakauer did state that upon hearing that Beck was alive he “couldn’t believe it,” (p. 273). He also felt, like Kamler, that “given up for dead yet again, Beck had simply refused to succumb,” (p. 273). After reading the novel and watching the video, it was interesting for me to see a small story be discussed in much greater detail. In being able to hear about one event from the perspectives of both Jon and Ken, it has shown me that everyone that was present on Everest in ’96 likely has at least a slightly different recollection about the events that transpired. So while Into Thin Air tries to tell everyone’s story, it really is just through the eyes of one observer. 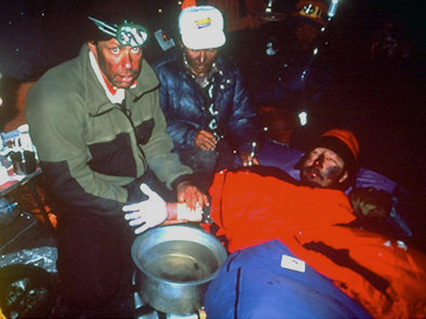 Kamler cares for Weathers after he stumbles into the medical tent. Severe frostbite can be seen on the climber's nose and hand.
Powered by